The Key Highlights of Roger Federer’s Retirement and how was his fabulous Carrier in Tennis? 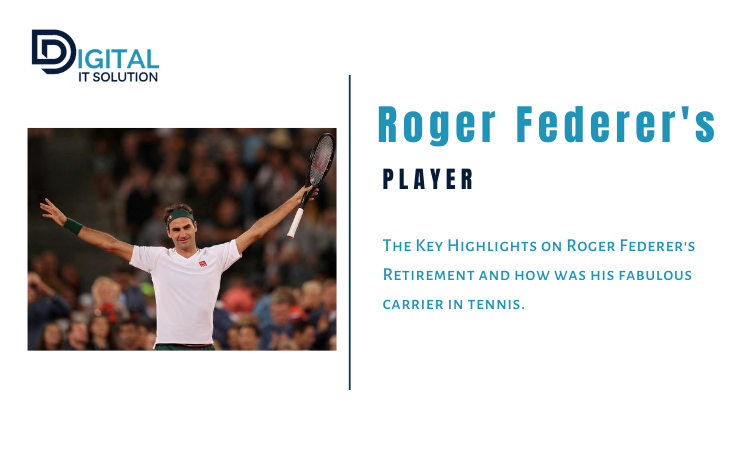 Roger Federer’s Retirement at the age of 41, announced by himself after the Laver Cup in London, one of the greatest sporting careers will come to an end.

The Swiss tennis legend is widely considered to be the greatest male player of all time and one of the most successful athletes of all time. He was ranked world No. 1 for a record 237 consecutive weeks and was ranked No. 2 on eight separate occasions.

Before Roger Federer’s retirement was announced, he has won 20 Grand Slam singles titles, an Olympic gold medal in doubles, and he is the only man in history to have reached a career grand slam plus winning at least one major title during each of three different decades.

The reason for Roger Federer’s retirement was his injuries and surgeries.

After losing to Hubert Hurkacz in the Wimbledon quarterfinals, 6-3, 7-6(4), 6-0, it was discovered that Roger Federer had reinjured the knee that had previously kept him off the tour for more than a year. Federer has participated in five events since January 2020 and undergone three knee surgeries. He cited late-career injury concerns as the cause of his retirement.

At the age of 41, Roger Federer made his retirement announcement. Given that he was born in 1981, he now believes that his body is telling him to stop. He cited this justification in his retirement speech.

· The Golden Tennis Era, which was dominated by the Big 3 players Rafael Nadal, Novak Djokovic, and the Swiss Maestro himself, is coming to an end. Federer’s retirement leaves it one defeat out of three. The following two will probably occur in a few years.
· For a significant period of time, Roger Federer held the record for the most male grand slam titles, surpassing his idol Pete Sampras, whose total of 14 titles was once considered to be practically untouchable.
· He has set a number of records that demonstrate his excellence and perseverance during his career, such as making it to 23 consecutive grand slam semifinals and 36 consecutive quarterfinals.
· Roger Federer has won 103 ATP singles titles, 28 ATP Masters titles, and six ATP Finals. In 1,526 ATP tour matches, he has a singles record of 1251-275 (82%) points.

· Roger Federer, when just 21 years old, captured his maiden grand slam title at Wimbledon in 2003. Within 14 months, he had established his dominance.
· The standard that Federer set prompted prominent opponents to follow, and as a result, Rafael Nadal, now 36, and subsequently Novak Djokovic, now 35, rose to prominence to create the big three, probably the greatest era of men’s tennis.
· At his best between 2004 and 2007, he had a 247-15 (94%) record, meticulously redefining what excellence in the men’s game meant. The statistics and achievements only touch on a small section of Federer’s life.
· The Swiss Indoors in Basel, where Roger Federer spent some of his formative years as a ball child, is a place he regularly brings up. Robert, a Swiss father, and Lynette, a South African mother, were his parents, and he was born in Basel.
· Federer’s fiery temperament and lack of court discipline were well known when he was younger, despite the apparent talent that helped him stand out.
· On the strength of those early abilities, Federer developed into a player whose calmness under pressure was essential to his success.
· In the view of many, Roger Federer’s achievement was made even more remarkable by the seeming ease with which he moved through the sport.
· Because of his fluid, smooth technique, desire to constantly explore the net, and repertoire of strokes that were as diversified as any in the world, Roger Federer stood out at a time when modern tennis was still heading back towards the baseline.