Ram Charan is a potential name in the Prediction List of Oscars 2023 this year? 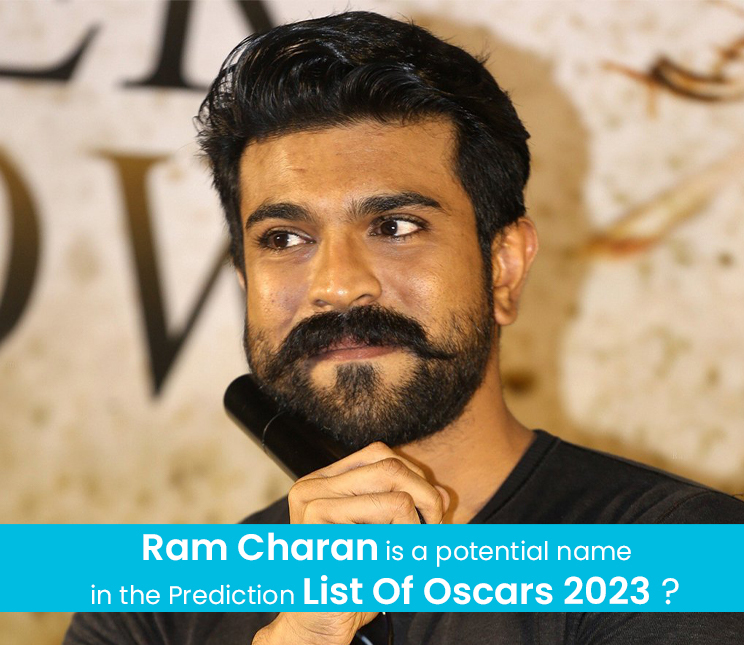 Ram Charan is a potential name in the Prediction List of Oscars 2023 this year.

Ram Charan fans have gone ecstatic with the news that he might make it into the Prediction List of Oscars 2023 in the category of best actor for the movie RRR, according to the famous international magazine, Variety.

The magazine also predicted that the blockbuster movie RRR may be nominated in three categories for Oscars 2023- Best International Feature, Best Original Song, and Best Actor.

The director of the Ram Charan starrer RRR movie, SS Rajamouli, and his team, have started campaigning for the Oscar Awards in 2023. They have brought out a poster in which they ask the International film fraternity to consider the RRR movie in 15 different categories of the Oscar. These kinds of posters are released by filmmakers every year to increase the hype around their movies and catch the attention of the Oscar committee.

RRR placed second in the Best Picture category and received a nomination for Best Picture at the Hollywood Critics Association Midseason Awards.

Ram Charan is one of the most beloved actors in the Telugu Film Industry and also one of the highest-paid actors in the industry. His fame skyrocketed after the RRR movie directed by SS Rajamouli. He is not only famous but also critically acclaimed for his acting skills as he has won three Filmfare awards and two Nandi Awards. He has consistently featured in Forbes India’s Celebrity 100 List since 2013.

Ram Charan was born on 27th March 1985 in Madras to the Telugu film actor Chiranjeevi and his wife Surekha. He is the grandson of Allu Ramalingaiah and the nephew of Nagendra Babu, Pawan Kalyan Allu Aravind.

He completed his education at the Padma Seshadri Bala Bhavan, Chennai, Lawrence School, Lovedale, and the Hyderabad Public School, Begumpet. Because of his interest in the field of acting, he attended Kishore Namit Kapoor’s acting school in Mumbai.

Charan made his debut in 2007 as the leading actor in the movie Chirutha which was directed by Puri Jagannadh. His performance in this movie earned him the Filmfare Best South Debutant Award and Nandi Special Jury Award.

In 2012, he starred in the film named Racha in which his performance earned two nominations – Filmfare Best Award Actor- Telugu and SIIMA Best Actor Award (Telugu). He made his acting debut in the same year with the remake of the hit Bollywood movie, Zanjeer, but it did not receive a lot of appreciation at the box office.

After this, he went on to star in some hit movies such as Yevadu and Govindudu Andarivadele in the year 2014. In 2016, he appeared in the movie Dhruva which was a commercial success at the box office. Then came one of the career-best performances of Ram Charan in the movie Rangsthalam of 2018. And then he went on to star in one of the most commercially hit movies of 2022, RRR, in which he acted alongside NTR Jr and Alia Bhatt.

The wife of Ram Charan, Upasana Kamineni, is the Vice Chairman of Apollo Charity and the Chief Editor of B Positive Magazine. She is the granddaughter of Prathap C. Reddy who is the Executive Chairman of the Apollo Hospitals and the daughter of Shobana Kamineni. They got married on June 14, 2022, in Hyderabad.