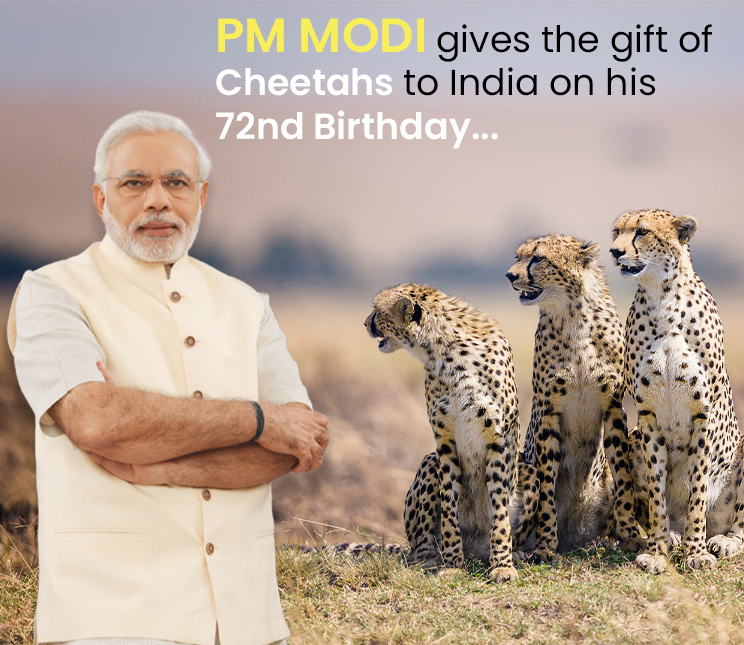 On 17th September 2022, eight Cheetahs were released in Kuno National Park located in Madhya Pradesh, India after being airlifted from Windhoek, Namibia in a helicopter ride. Kuno National Park is located in the Sheopur district, 165km away from Gwalior. An international non-profit organization with its headquarter located in Namibia and dedicated to saving the endangered species of Cheetahs all over the world kept a close watch on the entire operation and reported that there are five females in the first batch of Cheetahs that were brought back to India after seventy years of extinction. The female Cheetahs are younger aged between two and five years and the males are aged between 4.5 years and 5.5 years. The cheetahs are all fitted with radio collars that allow for satellite tracking. A dedicated monitoring team is assigned to each cheetah and will continuously keep a watch on its movements.

PM Modi along with the CM of Madhya Pradesh, Shivraj Singh Chauhan, welcomed the wild cats onto Indian soil. He said while addressing the media “there was no better gift for Madhya Pradesh to receive on Prime Minister Narendra Modi’s birthday than this, referring to the ‘historic’ transport of the wild cats from Namibia to the Kuno National Park as the largest wildlife incident of the century. This will boost tourism in the State, particularly, in the Kuno- Palpur region.

Later PM Modi was seen clicking the pictures of these eight Cheetahs using a professional camera and sporting a complete safari look with a fedora hat. PM Modi said while addressing the media that it was unfortunate that the Cheetahs became extinct in 1952 but no constructive efforts were made to rehabilitate them in the country. He thanked the Namibian government for their support in introducing Cheetahs back into India after such a long time. But Narendra Modiji said that the general population will have to wait for a few months before they will be able to spot these Cheetahs in the Kuno National Park. He said that these Cheetahs are new in this habitat so we have to give them some time before they will be able to adapt to this environment and call it their home. This first batch of Cheetahs will be crucial as they will be the threshold for measuring the success of this plan for making India home to four wildcats – tigers, leopards, lions, and cheetahs. Almost 10-12 Cheetahs are expected to be brought into India and almost 35 tigers are needed for a stabilized population.

In 2010, the plan was first drafted by the Environment Ministry for bringing back Cheetahs in India from Africa but the plan ran into some legal complications. In 2012, Supreme Court temporarily stayed the project. It was later in 2017 that the National Tiger Conservation Authority revived the proposal and asked the Supreme Court to lift this stay.  And it was in 2020 that the Supreme Court finally allowed the Government to carry out this project. The project was further delayed due to, covid restrictions and now, at last, India is once again home to Cheetahs.