FIFA 23 Upcoming Games To Watch Out 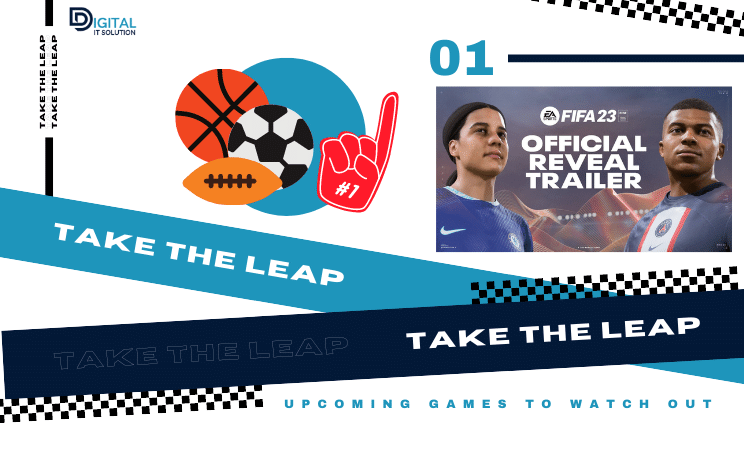 Keep an eye out for the highly anticipated video games releasing in the coming weeks. With 2022 nearing its final quarter, there are still some big video game title releases left. From EA Sports’ latest FIFA installment to 2018’s anticipated God of War sequel, here are the top video games to watch in the coming weeks. FIFA 23 – September 30 Not the only sports title developed by EA, but probably the most popular series. FIFA 23 will be the final collaboration between the FIFA organization and EA Sports. The title will be released for PC, PS5, PS4, and Xbox Series X/S and Xbox One. It will also be available on Nintendo Switch and Google Stadia.

What Highlights It has?

Amongst a number of changes including the new team sheets, HyperMotion 2 animations and more, FIFA 23 will also be the first game in the series where cross-play between PC, PS and Xbox players will be possible. The game will be available on September 30, with an early-access version available for pre-order players from September 27.

Experience the pinnacle of international football with the FIFA World Cup Qatar 2022™ and FIFA Women’s World Cup Australia and New Zealand 2023™ as post-launch content updates at no additional cost. Stay tuned for more details in the build-up to each tournament.

Play as women’s club teams for the first time in EA SPORTS FIFA history as the Barclays FA Women’s Super League and Division 1 Arkema come to FIFA 23 at launch. Plus, enjoy dedicated HyperMotion2 capture on next-gen that brings unique, true-to-life football motion to the women’s game in FIFA 23 – with more detail to come throughout the summer.

Build your dream squad from thousands of players past and present in the most popular mode in FIFA.

FUT 23 brings new FUT Moments and a revamped Chemistry system to give you a whole new way to play and build your dream squad.

Greats of the game and past fan favourites return to the pitch in FUT 23 with new ICONs and FUT Heroes to add to your team.

Live out your football dreams as a manager or a player in Career Mode FIFA 23 brings you the ability to define your personality as a player, manage as some of football’s most famous names, and enjoy a new way to play your season with Playable Highlights in the most authentic FIFA Career Mode experience to date.

See what’s new in FIFA 23, with HyperMotion2 Technology, both men’s and women’s FIFA World Cup™ tournaments, cross-play features, and more, with Digital and It Solution.